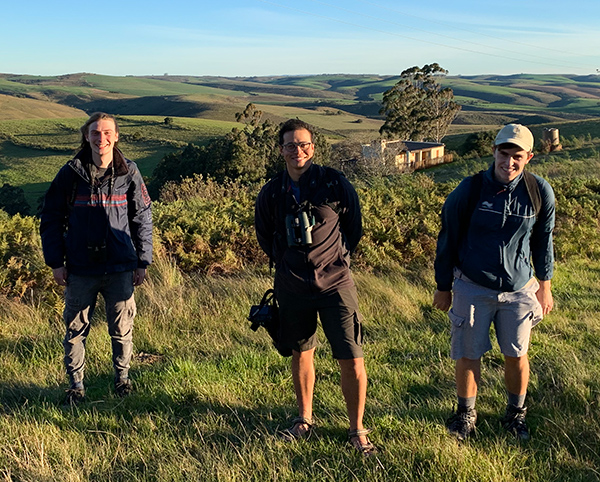 In the image, Cameron (left), Rion (right) and Dr Gabriel Jamie (centre) carry out honeyguide fieldwork in South Africa, at Honeywood Farm near Swellendam in the Western Cape.

END_OF_DOCUMENT_TOKEN_TO_BE_REPLACED

David had a very successful field trip to our honeyguide study site in the Niassa Special Reserve, Mozambique, where as well as collecting data he was able to celebrate a fourth year of collaboration with our honey-hunter colleagues at our end of year ‘festa’. On this trip David was accompanied by Tom Bachmann – a masters student at Wageningen University – who has been providing valuable help with data checking and field assistance. The ‘segos’ (greater honeyguides) in the area were as eager to guide as always, and Tom and David collected data from more than thirty guiding trips. Some of the honeyguides which took them and their Mozambican honey-hunter colleagues to bees were known birds which were colour-ringed on previous trips, indicating that birds in our study population are still thriving!