How a mutualism evolves: learning, coevolution, and their ecosystem consequences in human-honeyguide interactions. 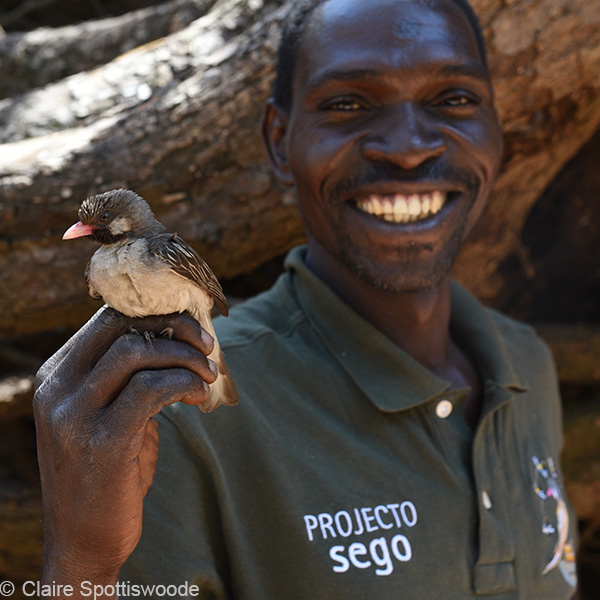 Honeyguides are wild birds, not tame. This male Greater Honeyguide, held by honey-hunter Orlando Yassene, has been briefly captured for research.

We study a remarkable mutualism: the foraging partnership between an African bird species, the greater honeyguide, and human honey-hunters whom it guides to bees’ nests. Honeyguides know where bees’ nests are located and like to eat beeswax; humans know how to subdue the bees using fire, and open the nest using axes. By working together, the two species can locate the bees, overcome the bees’ defences and gain access to the nest, thus providing beeswax for the honeyguides and honey for the humans. This specialised relationship is an extremely rare example of animal-human cooperation that has evolved through natural selection.

Why study honeyguides? Honeyguide-human interactions give us a wonderful opportunity to study mutualisms in nature. This is because local human and honeyguide populations vary strikingly in whether and how they cooperate and communicate, and because we can readily manipulate these interactions experimentally to understand how the mutualism functions.

Who are we? We are a team of researchers working in close cooperation with rural honey-hunting communities, particularly in the Niassa Special Reserve in northern Mozambique, where our project is known locally as ‘Projecto Sego’ (Project Honeyguide). Our research team is based jointly at the University of Cambridge in the UK and the University of Cape Town in South Africa, and we collaborate widely with researchers elsewhere. In Mozambique, our research is hosted by the Mariri Environmental Centre run by the Niassa Carnivore Project. We are funded by the European Research Council (Consolidator Grant 725185 to Claire Spottiswoode).

What are we studying? The overall aim of our research is to understand the ecology, evolution and conservation implications of the honeyguide-human relationship, as a window into the origin and maintenance of mutually beneficial interactions between species (mutualisms). Our work builds on pioneering research in Kenya by Dr Hussein Isack in the 1980s, who first demonstrated scientifically how the mutualism functions. Now, in the Niassa Reserve, and at other locations in south-eastern Africa, we are asking: is learning involved in maintaining a geographical mosaic of honeyguide adaptation to different human cultures? How does reciprocal communication between humans and honeyguides mediate their interactions? How does the mutualism influence the ecosystems in which it operates, owing to its influence on bees, trees, fire, and human communities? What happens to each party and their ecosystems when the mutualism breaks down, and how quickly can a cooperative culture be re-ignited following its loss? In so doing we are testing for the first time the hypothesis that reciprocal learning can give rise to matching cultural traits between interacting species.

How can you help us? If you have seen or heard a Greater Honeyguide anywhere in Africa, and whether or not it guided you, please tell us about it! This will help us in our research. Please visit our citizen science project at Honeyguiding.me for more information and to submit a sighting.

Why does this matter? Understanding the role of behavioural adaptations such as learning is crucial to explain how and why the outcome of species interactions varies in space and time, and to predict how they will respond to a rapidly changing world. This is relevant to conservation, because mutualisms can have wide reach in shaping ecological communities. The honeyguide-human relationship is currently dwindling throughout Africa, and before it fades away, we need to understand this ancient part of our own species’ evolutionary history in those few places where it still thrives.

Please click on an image to walk through a honey-hunt: 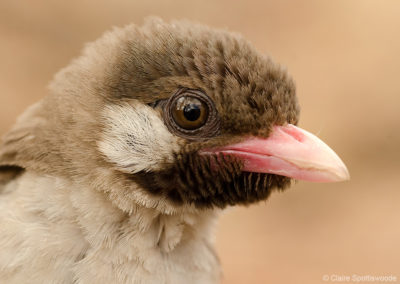 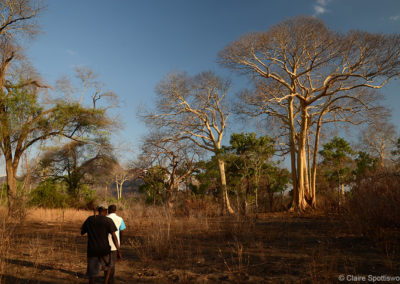 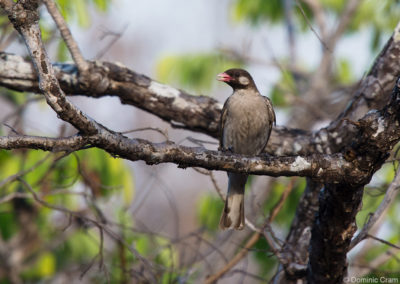 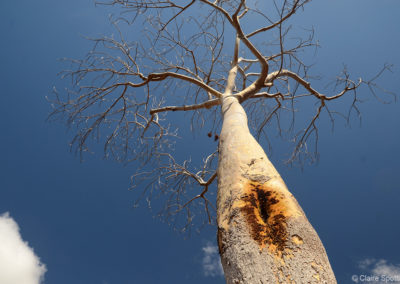 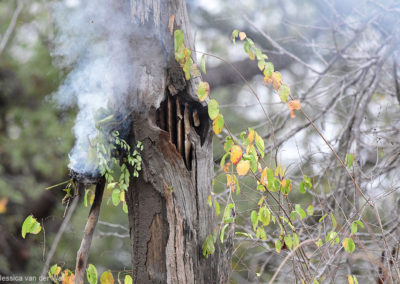 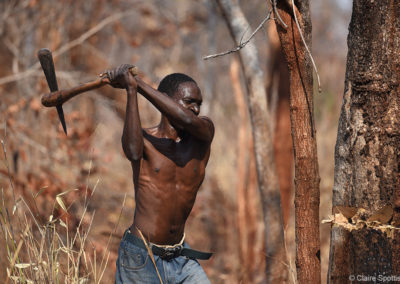 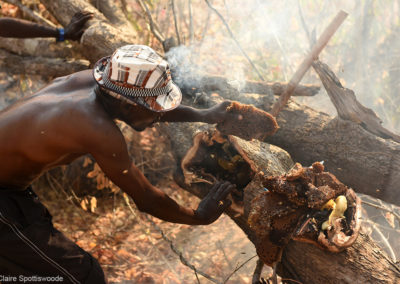 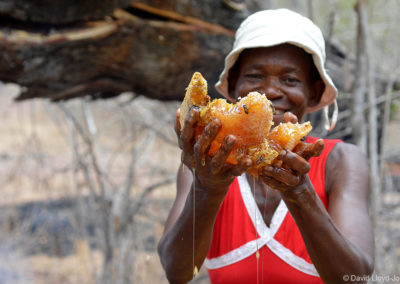 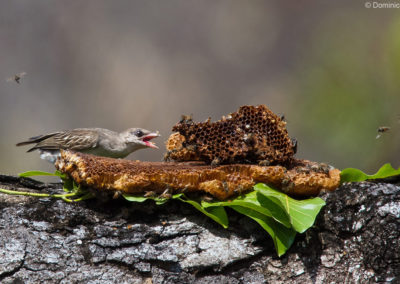 Learn more
Help us by submitting a honeyguide sighting here

END_OF_DOCUMENT_TOKEN_TO_BE_REPLACED 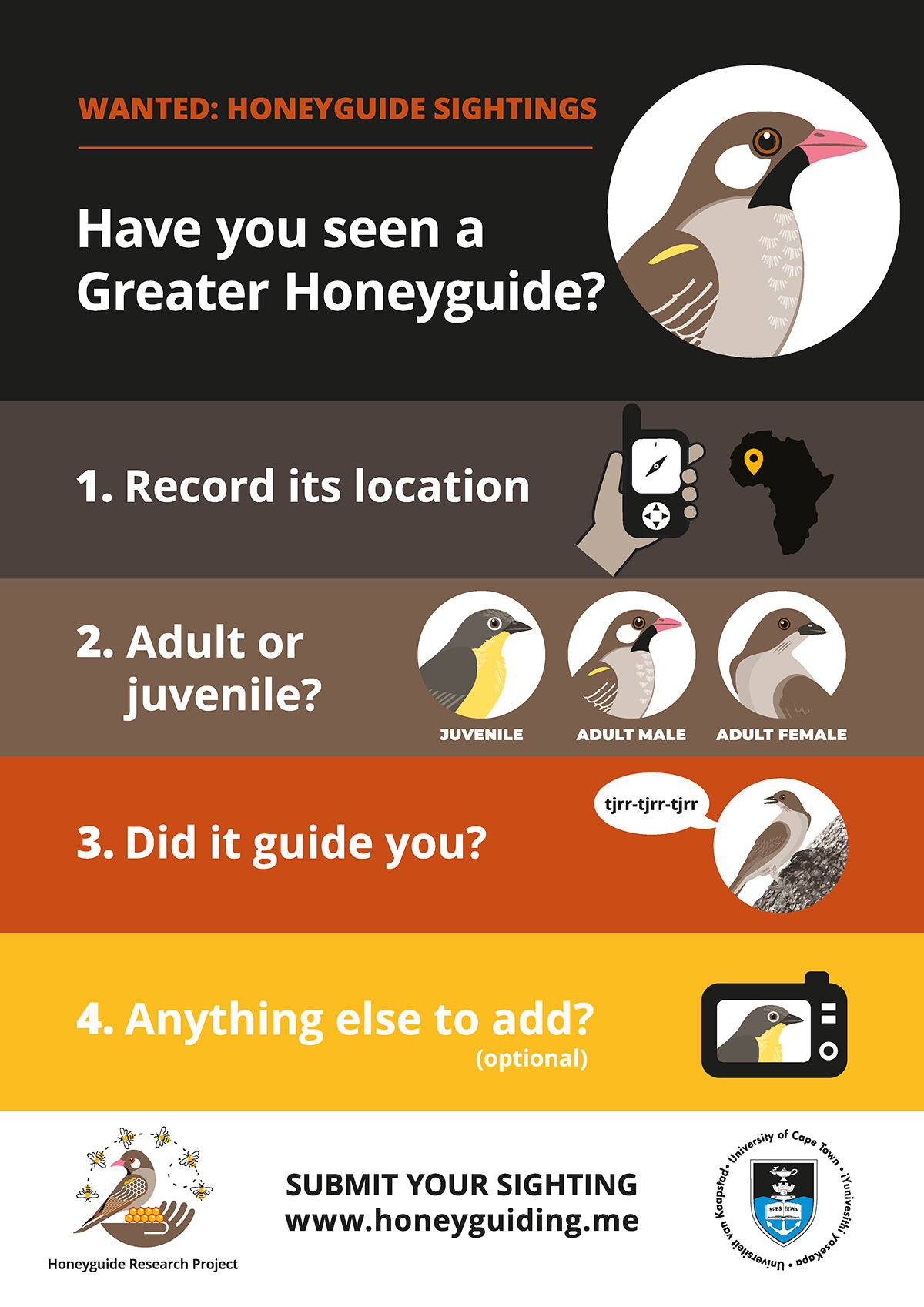 This project has received funding from the European Research Council (ERC) under the European Union’s Horizon 2020 research and innovation programme (Grant agreement No. 725185).