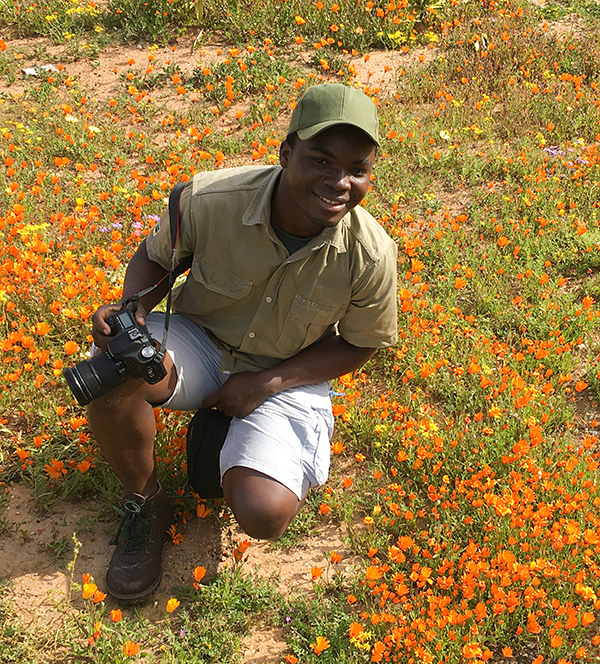 I have always had very diverse interests in nature which trace back to my childhood. These interests later landed me in Gorongosa National Park, where I participated in the very first Biodiversity Survey conducted by a team of national and international scientists. Later I became a member of the scientific team, working in the E.O. Wilson Biodiversity Laboratory (EOWL) in Gorongosa as a research technician focussing on the documentation of insect biodiversity. That experience aroused my interest in understanding insect biology, evolution, and interactions with other organisms.

My educational background is in agriculture and livestock from the Instituto Agrário de Chimoio in Mozambique, where I gained experience in crop and animal production, which enabled me to launch a project entitled Animal Protection and Health (PROTECSA) in 2012, whose main goal is to provide technical support to local communities to improve health, food and reproductive management of their livestock. I have also worked as a teacher in one of the community Institutes, and as a technician with the Food and Agriculture Organization (FAO). This in turn led me to enrol for a Biological Science Course degree at the Universidade Lúrio in Mozambique. For my research project, I studied the diversity and ectoparasitic load of grasshoppers in Quirimbas National Park. I am currently studying towards a MSc in Conservation Biology at the University of Cape Town and for my thesis, I am studying the phylogeography of flightless spring katydids in the Greater Cape Floristic Region. In 2022 I joined the African Honeyguides as an expert entomologist. My overriding experience in ecology, biogeography, systematics, macrophotography, and conservation of insects, as well as my entomology background, will come in handy in this project.

My role within the African Honeyguides Project is to better understand the effect of human-honeyguide mutualism on honeybee behaviour and ecology, and pollination. Honey-hunting is considered a major threat to wild bee populations in Asia and has never been evaluated in Africa. This study is extremely relevant, especially in Niassa Special Reserve, where this rare remarkable cooperative relationship still thrives. To harvest the bees’ nest, smoke is often used to subdue the bees. However, not much is known about the effects of honey-hunting on honeybees and pollination.